Thank you for Subscribing to Aerospace and Defense Review Weekly Brief

Michael Gannon, COO
Air travel is no longer a luxury commodity. In today’s sustainable society, the growing availability of affordable air travel has considerably widened aviation’s role. As the number of air travellers increases, airline organisations are struggling to manage operations smoothly and minimise delays due to aircraft congestion. Several airport's Air Traffic Controllers (ATC) are "holding aircraft" (having to wait at the take-off position before take-off or circling in the air before landing) to optimize runway usage and prolonging the flight routes to give airports more time to decongest their parking areas. Despite adopting this new approach, airline and aviation companies are reporting increased frustration levels in pilots and passengers alike, as the longer flight time is extending their journeys. Furthermore, flights burn a significant amount of fuel while in a holding pattern, which is expanding the carbon footprint of aviation operations in a world that is driving towards greener technologies and minimal CO2 emissions. As a result, the current aviation sector is at a precipice, where they have to find a transformative way to manage air traffic flow, which allows minimal airport congestion and drives greener operations. Addressing this need with its revolutionary SMART (Scheduled Managed Arrival Required Time) Slot departure and arrival manager system is Ireland-based Shift Aviation Solutions (SASI).

The company’s portfolio is backed by the first-hand experiences of its leadership team, which comprises Rehan van Tonder—a pilot and airline captain and senior consultant in major airlines, Damian Fannin, and Michael Gannon, who collectively have an aviation industry expertise of over six decades. SMART Slot has been tested across two prominent airports in the UK and EU with support from the Irish aviation giant Aer Lingus, as well as Narita Airport in Japan with Jet Star Japan as the participating airline. “Our SMART Slot solution has proven to minimise aircraft holding times, drive operational savings, and significantly cut down CO2 emissions, with accuracy levels previously unheard of in Air Traffic Management (ATM). We have completed more than 650 live operational flights in the Proof of Concept, as well as the trial in Japan and have a consistently achieved an accuracy level of less than 30 second deviation.” says Michael Gannon, chief operating officer at SASI.
The company offers an innovative airport and air traffic management approach and supports airlines by integrating with existing air traffic control systems, flight management implementations and others at airports. Each flight route is also monitored to dynamically confirm and update predictions for best suited arrival times. “We integrate with existing airport management deployments to comply with regulatory processes and create a predictable operations environment that reduces unnecessary costs while significantly lowering the CO2 footprint of each flight,” explains Gannon. Apart from the SMART Slot software suite, SASI is developing its ANSS (Active Noise Suppression System), which is a ground-based system specially designed to reduce aircraft approach and landing noise, thereby facilitating airports with curfews to operate round the clock.

A Philosophy that Drives Success

At the heart of SASI’s strong competencies is its customer-centric and value-based philosophy that enables the company to guarantee deliverables for clients at in an upfront cost neutral proposition. Through these links, SASI collects real-time flight data, which it then utilises to calculate the SMART Slot for an aircraft’s precise departure or arrival time sequence using Time Based Separation, in an iCloud Server Based Algorithm, which is communicated to the aircraft via an already established encrypted satellite communication process, managed by the airline's operations center. SASI's approach is to ensure that its clients evolve with the new strategies with ‘No Long Term Cost’ and at ‘Zero Risk.’ “Our portfolio’s remuneration package is entirely based on the percentage of savings it will generate for our clients,” adds Gannon.

SASI has also devised a new and innovative airline management model to help its clients significantly reduce their costs. The company has also developed a wide range of strategies that are designed to replace the existing operational and management models to drive tangible and real-time cost-savings. Furthermore, the company’s full line-up of services include environmental support, future pilot training programs, radiation exposure research, pilot health and cognition offerings, among others. Above all, Gannon envisions a future where airports will become "SMART Slot Enabled" to ensure enhanced consumer experiences, with more efficient aviation operations, while lowering carbon footprints. “I want airports to highlight their implementation of SMART Slot and drive greener and more cost-efficient operations,” states Gannon.

Ushering in a New Era for Aviation

SMART Slot is in the BETA stage of development, with an extensive amount of testing already showcasing its impeccable ability to deliver unprecedented ATM results. In fact, owing to its continuous drive to demonstrate the SMART Slot solution across multiple countries, including Ireland, England, EU and Japan, SASI has been recognised as a High Potential Start-up by Enterprise Ireland—the government agency responsible for supporting promising Ireland-based businesses, as well as gaining the EU Commission's Seal of Excellence in recognition of SMART Slot being a High Quality Project. Such unmatched capabilities combined with strong core competencies is propelling SASI to plan a Q2 2022 First Operational release of SMART Slot, which will perfectly poise it to capitalise on the imminent opportunity that the aviation sector will offer post-pandemic.

To conclude, Gannon reiterates the ethos of his company, “We are a ‘best of breed’ company with highly skilled individuals that will take the Aviation Industry to the next evolutionary level by supporting global Aviation development/expansion via the deployment of our transformative intellectual property (IP) and innovative solutions.” 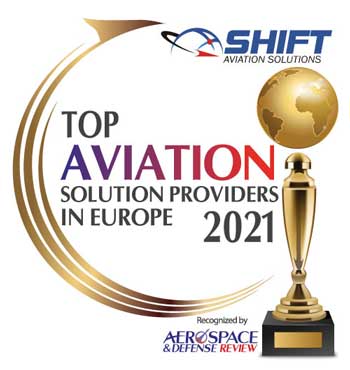 Description
Ireland-based Shift Aviation offers software solutions that can help aviation firms and airports eliminate aircraft holding while significantly reduce airline operating, increasing customer experience, while lowering CO2 emissions. The company offers an innovative airport and air traffic management approach and supports airlines by integrating with existing air traffic control systems, flight management implementations and others at airports. Through these links, SASI collects real-time flight data, which it then utilises to calculate the SMART Slot for an aircraft’s precise departure or arrival time sequence using Time Based Separation, in an iCloud Server Based Algorithm, which is communicated to the aircraft via an already established encrypted satellite communication process, managed by the airline's operations center 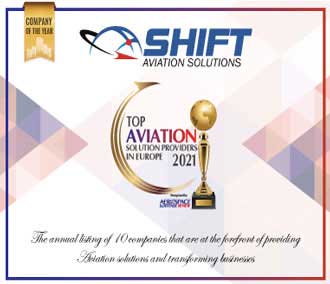